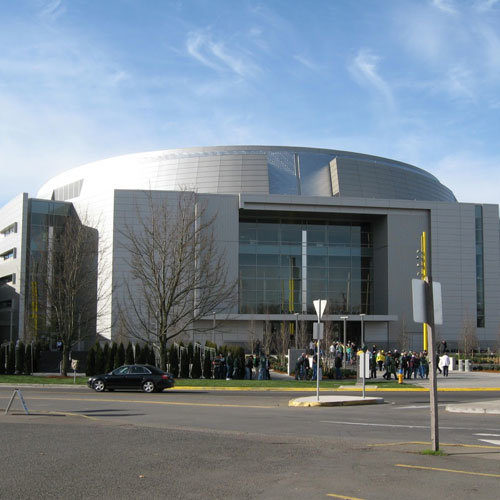 The city of Eugene lies at the southern end of the Willamette Valley, near the McKenzie and Willamette Rivers, some 50 miles away from the coast. The first settlers of the area that is today Eugene were most likely the Kalapuyans. By the beginning of the 19th century, they were followed by French fur traders who settled seasonally in the Willamette Valley.

The city was named Eugene in 1889 in honor of Eugene Franklin Skinner, who ran a ferry service across the Willamette River. He arrived in the Willamette Valley in 1846 with more than a thousand other colonists. Advised by the Kalapuyans to build on high ground to avoid flooding, he erected the first Anglo cabin, which was later turned into the first post office in Eugene.

THE WEATHER IN EUGENE, OREGON

Eugene lies in the Marine West Coast climate zone, with cool summer Mediterranean climate. Summers in Eugene are warm and dry, while winters are cool and wet. Spring and fall also see quite a bit of precipitation, with light rain falling for long periods. Snow is relatively regular, but it rarely accumulates – the average seasonal amount is around 5 inches. The hottest months are July and August, with average highs of around 82 °F, while about 15 days per year have temperatures above 90 °F. The coolest month is December, with the average daytime high in the mid-40s, and nights averaging just above the freezing point.

If you suffer from seasonal allergies, you should know that the combination of summer grass pollen and the shape of the hills around the city mean that Eugene has the highest pollen counts in the country. These have often led to difficulties for athletes who compete here. For example, in the Olympic trials in 1972, Jim Ryun had to be flown in by helicopter because he was allergic to Eugene’s grass seed pollen. Further, six-time Olympian Maria Mutola stopped training in this area “in part to avoid allergies”.

THE ECONOMY OF EUGENE, OREGON

In addition, the city is home to the corporate headquarters for the employee-owned Bi-Mart corporation and family-owned Market of Choice. Other major employers of the city include Organically Grown Company, Golden Temple, Merry Hempsters, Springfield Creamery, Mountain Rose Herbs, Shoe Goo, Green Gear Cycling, as well as many multinational businesses (Nike, Taco Time, and Brøderbund Software).

THE ECONOMY OF EUGENE, OREGON

Whatever your personal interests are, you will definitely find something right up your alley in this city. Eugene is noted for a significant population of people in pursuit of original, alternative ideas. These ideas often culminate in things such as the Eugene Saturday Market, open every Saturday from April through November. It was founded in 1970 as the first “Saturday Market” in the country. Then there’s the Lane County Farmer’s Market, where all vendors create or grow their own products. Some of the cultural events that take place in the city are:

To find more information on Eugene, feel free visit the official website of the city .

If you have made up your mind about moving, we are here to help you! West Coast East Coast Express is a team of moving professionals dedicated to achieving ultimate satisfaction with all our customers. We provide a wide array of moving services, including:

Give us a call today to receive more information. Our customer support representatives will provide you with the best moving quotes in the country. Call West Coast East Coast Express movers to schedule your relocation to Eugene and start breathing in some fresh air (watch out for that pollen, though!). We are looking forward to hearing from you!